Phase V was a planning phase that expanded EBDM to 6 additional counties in tandem with a state-level team, and was envisioned as a collaborative and coordinated effort between the state team and local teams, as they progressed along the roadmap of planning activities developed by NIC.  As a first step in this process, a two-day kickoff meeting with NIC was held on June 29-30, 2015 in Green Lake.  At this meeting, over 150 attendees representing Eau Claire and Milwaukee Counties, the state team, and the six new local teams participated in exercises designed to enhance collaboration and prepare teams for Phase V.  Per NIC, the goals of the kickoff meeting were to:

Following the kickoff, the state and local teams continued Phase V planning activities, with a competitive state application for Phase VI (Implementation Phase) due in July, 2016.  At the state level, the Evidence-Based Decision Making (EBDM) Subcommittee served as the Phase V State-Level EBDM Policy Team, under the WI CJCC, with additions to the current membership to meet the decision points and stakeholder groups defined by the National Institute of Corrections.  In this role, the EBDM Subcommittee worked in parallel with the local teams in conducting Phase V Roadmap activities, while providing a constant feedback loop to the WI CJCC and its Executive Committee.  This structure ensured that the Phase V State-Level EBDM Policy Team was well positioned to engage in the activities outlined in the Phase V Roadmap.  While not part of the State-Level EBDM Policy Team, the other CJCC subcommittees aligned with those activities and provided the EBDM Subcommittee with resources, expertise and assistance in making this a successful statewide initiative.

As part of the state’s Phase V planning efforts, a number of workgroups were formed to further develop the change target goals that the State Team identified during the system mapping process.  Each Change Target Workgroup’s activities included:

These efforts led to the development of final logic models and actions plans for each change target, which were incorporated into the State’s Phase VI application, which was submitted on July 29, 2016. 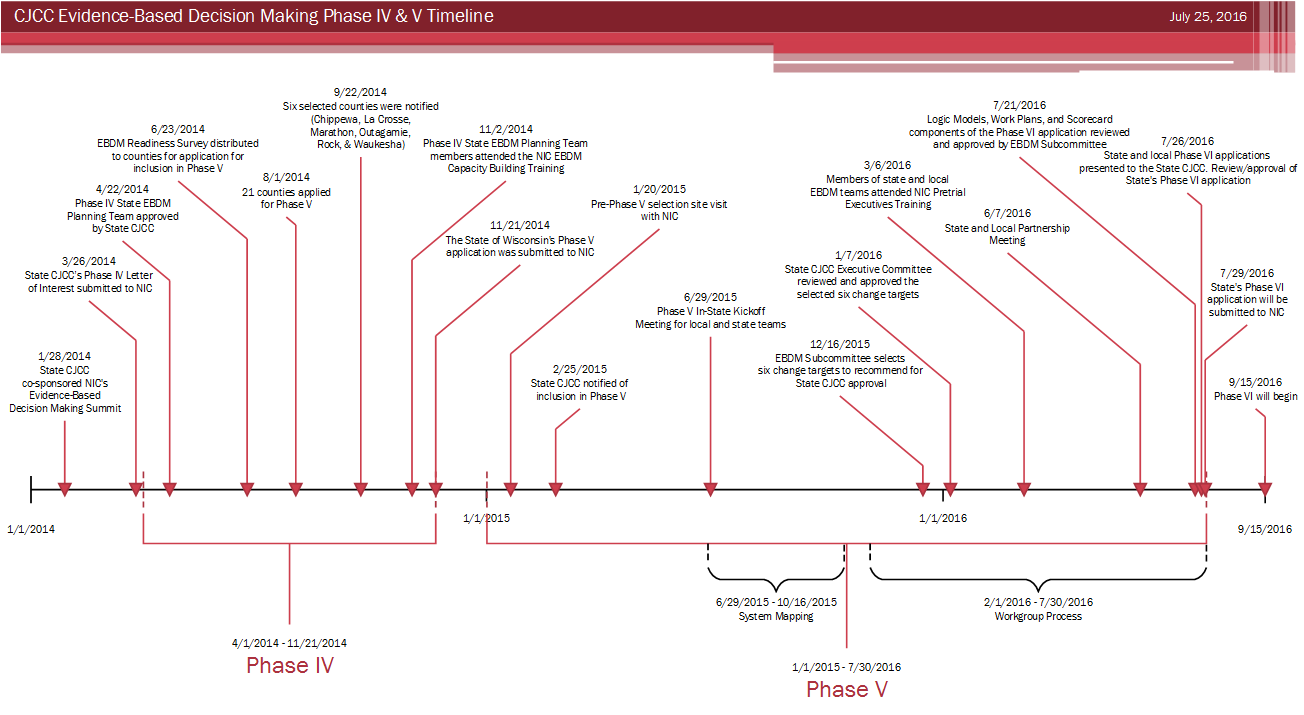